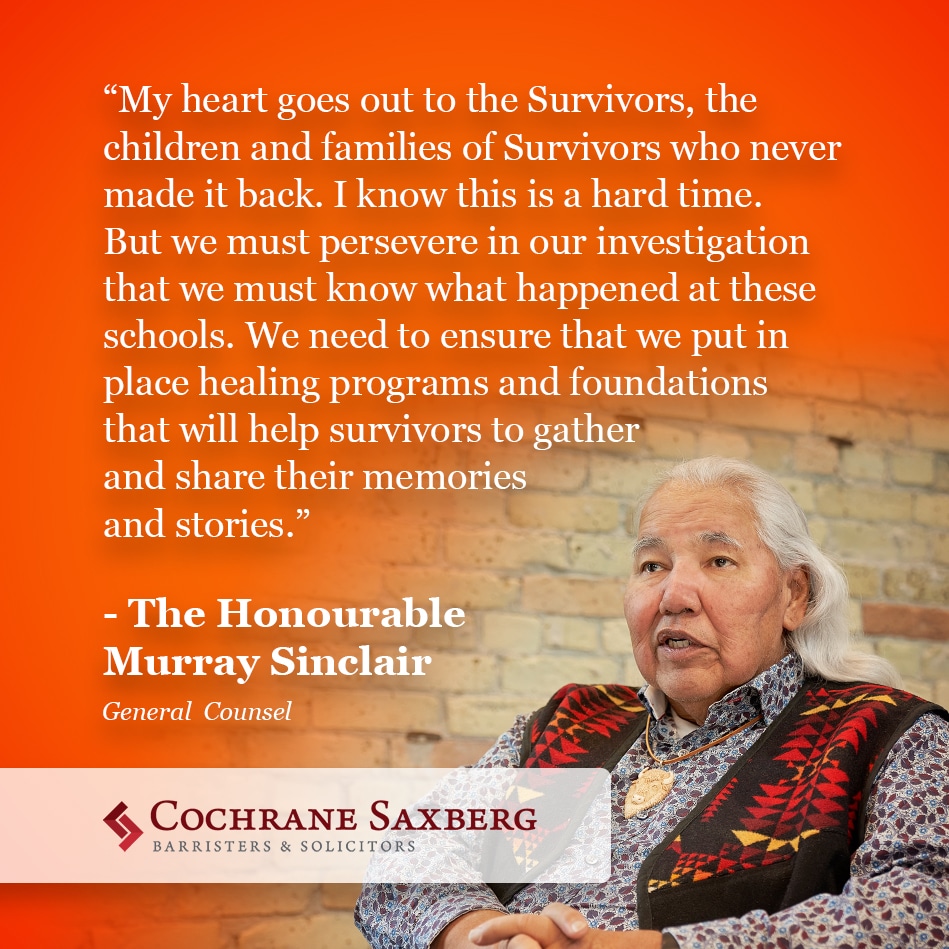 The partners, lawyers, and staff of Cochrane Saxberg join The Honourable Murray Sinclair in deep sadness as the country mourns the loss of 215 Indigenous children found buried in an unmarked grave at Kamloops Indian Residential School. We send our sincere condolences to the Tk’emlúps te Secwépemc First Nation as they grieve over the horrific discovery. Our hearts are with the thousands of Survivors and families who continue to suffer from the multi-generational impacts of Canada’s attempt to erase Indigenous people.

We echo the “Missing Children and Burial Information” Calls to Action from the Truth and Reconciliation Commission and urge the federal government to re-commit to these recommendations and work with churches, Indigenous leadership, and Survivors to implement Calls #71 through #76. We further demand that the Roman Catholic Church issue a formal apology to Survivors, their families, and Indigenous communities for their role in administering residential schools, and for the harm and deaths caused to Indigenous children through emotional, spiritual, physical and sexual abuse.

Cochrane Saxberg is grateful for the guiding words of The Honourable Murray Sinclair, whom made public remarks on June 1, 2021 regarding the discovery of the 215 Indigenous children:

I wanted to take the opportunity to speak to you regarding the situation that has come to the public’s eye about the discovery of bodies at the residential school in Kamloops, British Columbia, Canada.

When I was asked to chair the Truth & Reconciliation Commission, I thought that I had a pretty good idea of what to expect. Discovering what was going on in the schools, I thought, would be accomplished by listening to what the survivors told us and recording their stories. I undertook that part of the work openly and willingly, with what I thought was a good understanding of what they were going to tell us.

But the stories from the survivors proved to be horrendous. One of the most common stories that we heard were from survivors who talked about the children who died in the schools and whose deaths they witnessed. Just as often, we heard about the loneliness and separation from their family – how they lost so much.

One aspect of residential schools that really proved to be quite shocking to me personally, was the stories that we began to gather of the children who died in the schools. Of the children who died, sometimes deliberately, it was at the hands of others who were there, and in such large numbers.

We had no expectation that this would be a part of the work we were doing. We asked the government to allow us to conduct a fuller inquiry to that part of the work of the TRC, to explore that on behalf of the survivors and Canadian public. We submitted a proposal, as it was not within the mandate of the TRC, and that request was denied. So largely we did what we could, but it was not anywhere near what we needed to investigate. Now we are seeing evidence of the large number of children who died.

We know there are lots of sites similar to Kamloops that are going to come to light in the future. We need to begin to prepare ourselves for that.

Since the revelation of what has happened at Kamloops has come to light, I have been inundated with calls from Survivors. Hundreds of calls, often just to cry. I can hear not only the pain and the anguish, but also the anger that no one believed the stories they had told. I can also hear their sense that they have lost some hope that maybe those children that hadn’t returned might still be found. They now know that may not happen.

My heart goes out to the Survivors, the children and families of Survivors who never made it back. I know this is a hard time. But we must persevere in our investigation that we must know what happened at these schools. We need to ensure that we put in place healing programs and foundations that will help survivors to gather and share their memories and stories.

I pray for you all and hope that you can find a way to continue on in a good and healthy way. Miigwech.

Cochrane Saxberg extends gratitude to The Honourable Murray Sinclair for this important message and call to take action. As the beginning of June marks the start of National Indigenous History Month, we invite others to join us in our commitment to learning, un-learning and educating others on the true history of residential schools and ongoing struggles faced by Indigenous people in Canada.

If you are in distress, the Indian Residential Schools Crisis Line is open 24-hours a day for Survivors of residential schools and their families. Please call 1-866-925-4419.