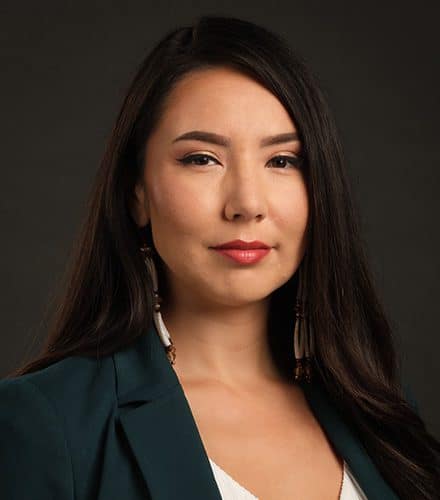 Danielle H. Morrison, a proud Treaty 3 member of the Anishinaabeg of Naongashiing, practices in the areas of Indigenous law, Child Protection and Litigation. She received her call in July 2020.

Prior to law school, Danielle developed a long-standing career in program delivery, policy review and advocacy with various Indigenous-led movements and non-profit organizations at the both the grassroots and national levels, including the National Association of Friendship Centres and the Assembly of First Nations. In that time, Danielle spent two years assisting Survivors of the Indian Residential Schools system as an outreach worker and form-filler for claims in the Independent Assessment Process.

Danielle holds a Bachelor of Arts degree with a major in Visual Arts and minor in Indigenous studies. In 2016, she was the lead Community & Cultural Engagement Coordinator for the national tour of Royal Winnipeg Ballet’s “Going Home Star: Truth and Reconciliation”, and has since co-founded the Indigenous Advisory Committee for the ballet company. Danielle is an avid community organizer and advocate for systemic and social change, and regularly volunteers her time in support of community-driven actions and movements.

Danielle is a visual graphic artist and photographer by trade, and volunteers her artistic visioning to create artwork that embodies the spirit and spreads the message of Indigenous resistance. She is a jingle dress dancer, small business owner of Clan Mother Goods and Apparel and proud parent to daughter, Evie Morrison-Blanchard.