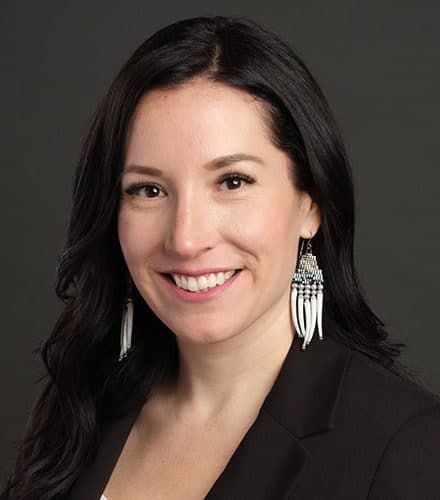 Jessica identifies as Cree and Metis. She is a member of the Opaskwayak Cree Nation and grew up in Cranberry Portage, MB between Lake Athapapuskow and the Cranberry Lakes (1-3), the Headwaters of the Grass River.

Jessica practices primarily in the areas of Indigenous law and Child Protection law.

Jessica was called to the Bar in 2011. She has specialized in Indigenous and Child Protection litigation, representing Indigenous nations, organizations, and child and family services agencies through all levels of litigation from settlement discussions to trials and appeals. Recently, she has shifted the focus of her practice to assisting Indigenous nations in the revitalization and codification of Indigenous laws to form the foundation of laws to be enacted further to An Act Respecting First Nation, Inuit and Metis children, youth and families (C-92). In this process, she is assisting clients in asserting jurisdiction with respect to child and family services, empowering community people and restoring community processes.

Jessica has appeared before the Commission of Inquiry into the Circumstances Surrounding the Death of Phoenix Sinclair, the Public Utilities Board, the Clean Environment Commission and all levels of Court in Manitoba.

Jessica has won awards and honours for her achievements and volunteer contributions. She was one of eight lawyers on the Families First Pro Bono Team who received the 2015 Pro Bono Award from the Manitoba Bar Association for preparing a report that engaged with families and developed a framework to address the issue of Missing and Murdered Indigenous Women and Girls.

Jessica has presented and lectured on Indigenous child welfare and Indigenous rights issues on numerous occasions to community and national organizations, the law school, conferences, high schools, radio and television media and has served on a number of boards over the years.

University of Manitoba, Bachelor of Laws, 2010