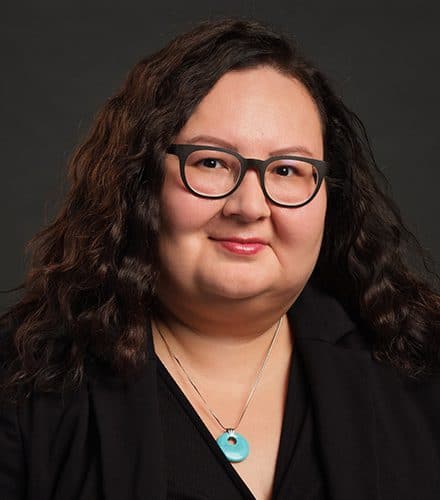 Stacey graduated from the Faculty of Law at the University of Manitoba in 2007 and received her Call to the Bar in 2008. She has extensive litigation experience and has represented people charged with offenses under the Criminal Code of Canada and the Youth Criminal Justice Act and has appeared in all levels of court in Manitoba.

She has appeared as counsel in many matters involving prosecutions by the Federal Prosecution Service of Canada, both as defense counsel and as a prosecuting agent in Winnipeg, Portage La Prairie and Thompson. When she established her sole practice in November 2017, she also started practicing Child Protection Law, representing parents and children in the Child Welfare system. In 2019, she was appointed to a panel of lawyers who act as Independent Counsel representing sexual assault complainants in 276 and 278 applications.

Stacey was one of eight lawyers on the Families First Pro Bono Team who received the 2015 Pro Bono Award from The Manitoba Bar Association for their work in preparing a report that engaged with families and developed a framework to address the issue of Missing and Murdered Indigenous Women and Girls.

When the National Inquiry into Missing and Murdered Indigenous Women and Girls was announced, Assembly of Manitoba Chiefs was granted intervenor status and Stacey joined their legal team as counsel. In 2018, she appeared at the Criminal Justice Systems Hearings in Quebec City as well as the Family and Child Welfare Hearings in Winnipeg.

Stacey is deeply invested in supporting the next generation of lawyers. She has been a practising professional at Robson Hall since 2018, teaching Aboriginal People and the Law: Criminal Justice and Family Law (Child Protection) Topics and the Indigenous People and the Criminal Justice System seminar. She has guest lectured at Robson Hall Faculty of Law and the University of Winnipeg in a variety of courses and has been a guest judge at the second-year advocacy trials. She has coached Solomon Greenberg finalists and provided feedback to Gale Cup students on their factums and advocacy. She was the co-organizer of the Kawaskimhon Moot, held in Winnipeg in March 2020. She has also conducted a wide range of workshops and lectures to Manitoba Prosecution Service, City of Winnipeg, Manitoba Bar Association and the Law Society of Manitoba.

Stacey is currently the Director of Advocacy and Public Relations for the Manitoba Bar Association and will ascend to the Presidency in 2025. She will be the first Anishinaabe woman to be president in the Bar Association’s history.

Stacey grew up in Thompson, Manitoba and is a proud member of Swan Lake First Nation (Gaabiskigamaag).